Ever since the implementation of IMO2020 0.5% Sulphur cap, the global shipping industry has had to adapt and change the way we think about testing and subsequent usage of the VLSFO product in the market. The highly saturated content of VLSFO compared to previously common high Sulphur blends has led to frequent occurrence of wax formation in the fuel at temperatures not previously experienced in the industry.

Most fuel oils contain wax, the type and amount of which varies with their sources and viscosities. A wax can be defined as a linear, branched, or cyclic hydrocarbon typically containing from 17 to 60 carbon numbers and a whole range of these hydrocarbons differing in melting points may be present in a particular fuel blend.

The molecular weight of the wax increases in tandem with its melting point and in the high molecular weight range, its crystal size tends to be reduced. However, the crystalline structures are affected by the thermal history of the fuel. When the fuel oil is cooled after being heated to a temperature at which the bulk of the low-melting-point wax is dissolved, re-crystallization of this wax is influenced by undissolved micro-crystals of higher melting point wax and a fine-grained sludge is thrown out.

This wax has a tendency to deposit on fuel storage tank heating coils, block transfer pipelines, block filters and lead to sludging of the purifiers. Hence to limit the formation of such sludge from wax deposition in storage the temperature cycles are to be avoided.

The above issues faced by the vessels warrant more manpower, time and cost which can be avoided by preemptive testing of the fuel when the sample arrives Maritec’s facilities. 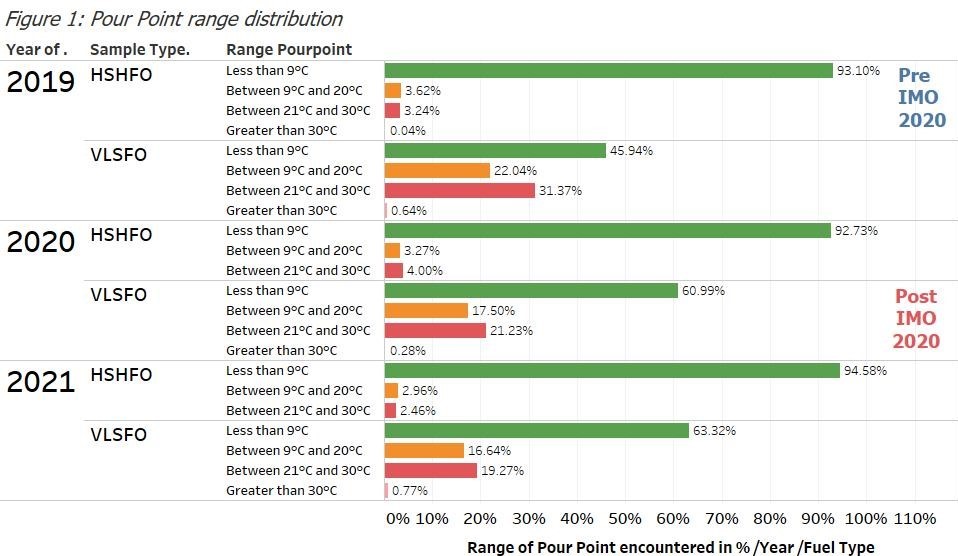 Figure 1 shows the change in Pour Point characteristics of overall fuels bunkered since beginning of 2019. It is evident that VLSFO with Pour Point > 21°C is becoming more commonplace in the market Post IMO2020.

Wax Appearance Temperature (WAT), or cloud point (in distillates), is the temperature at which a fuel sample first precipitates solid wax as it is being cooled under prescribed test conditions. Similarly, Wax Disappearance Temperature (WDT) is the temperature at which the last wax solids are melted into liquid during a warming cycle. Details of the operating principle and analysis technique of WAT and WDT analyzer is provided in Appendix1.

As shown in Figure 2, WAT and WDT is not co-related to the Pour Point as it depends on the composition of the fuel. With Pour Point tested at +9°C the tested WAT ranges from +24.2°C to +48.3°C. The usual recommendation of storing the fuel at 10°C above the Pour Point will fail to prevent the formation of wax crystals in the fuel.

Pour Point alone may not be a comprehensive and reliable parameter for determining cold flow properties of VLSFO, in particular, for managing wax formation issues and for trading area of low ambient temperature. The WAT and WDT measure the cold flow characteristics are suitable for the intended use.

Maritec checks Pour Point of VLSFO at 3°C intervals from ambient to <9°C and advise to conduct further testing by WAT and WDT analyzer on those samples whose tested Pour Point exceeds +21°C. Once the minimum temperature to which the fuel must be heated to melt the wax is readily known, the vessel can know and avoid operational issues well in advance.

Maritec has once again stepped up to provide its customers with a reliable testing method with a quick turnaround time. WAT and WDT is being offered as a part of Maritec Operational Assurance Package (MOAP). You may speak to our helpful sales representatives to subscribe to the service and understand how we can help you run your vessels safer.

The WAT and WDT analyzer uses an enhanced optical configuration and reduced sample thickness to penetrate through visually opaque fuel sample. A fuel specimen is cooled or warmed by a Peltier device at a constant rate of 1.5oC/min ± 0.1oC/min while continuously being illuminated by a light source.

As shown in Figure 3, a thin layer (< 1 mm) of sample is placed between a transparent flat cover and a metal surface which is continuously being cooled or heated by a thermoelectric device. A temperature sensor is also installed to measure the temperature of the fuel sample.

When no wax crystals are present in the sample, incident light at an oblique angle penetrates the transparent cover and the sample, and is specularly reflected off to the opposite direction. The minimal amount of light detected by an overhead optical detector represents the baseline signal of the analysis. When wax crystals are formed in the sample, the incident light is scattered, as shown in Figure 4. The scattered light emerges from the sample and is focused through the lens to the optical detector.