Updates to detection levels and effects on machinery encountered

Since the last alert (BF202203-02) dated 15-March-2022 on High Sulphur Bunker fuels contaminated with chlorinated organic compounds, CTI-Maritec has kept a close watch on the fuel quality in the region and collated further feedback on the fuel’s usage. The summary data on samples from Q1 2022 shows the contaminants mainly have a detrimental effect on the fuel injection system and to a certain extent on the fuel treatment and filtration system.

The damages reported have affected both conventional and electronic engines and not limited to any Engine maker and type. This has led to failure of prime movers for the vessels affected by the contaminated fuel.

Our investigation thus far confirmed high concentration level with an average value of 3419ppm on 1,2-Dichloroethane (CAS no.107-06-2) as the main compound detected. This compound in its pure form is considered hazardous to personnel by OSHA causing irritation to eyes, respiratory system and skin depending on the exposure concertation and time. As with any marine fuel it is advised to ensure sufficient ventilation in the machinery spaces, particularly in the fuel treatment room. It is also advised to minimize personnel exposure to fuel tank vent heads as these chlorinated organic compounds have low boiling points that can be below the heating temperature of settling and service tanks.

It is difficult to determine a safe concentration level suitable for marine diesel engine usage or the baseline wherein machinery problems may occur.  Due to the severity of the Machinery problems faced, we urge vessel operators to continue pre-emptively testing the fuels bunkered in the region by accredited test methods to detect these contaminants assessing the risk each bunker stem has on the vessel machinery.

It should be further noted that the compounds in question are not listed in the component table of the test method ASTM D7845-20 comprising of 29 commonly detected compounds and therefore can be missed by the quality control process in the supply side.

The percentage of High Sulphur fuels detected with Chlorinated Organic Compounds by CTI-Maritec in Singapore bunker stems in 2022 is given below, a decreasing trend in the detection is observed for April 2022. Nevertheless, CTI-Maritec advises vessel owners to be vigilant and continue to pre-emptively test their fuel samples obtained from the receiving manifold. 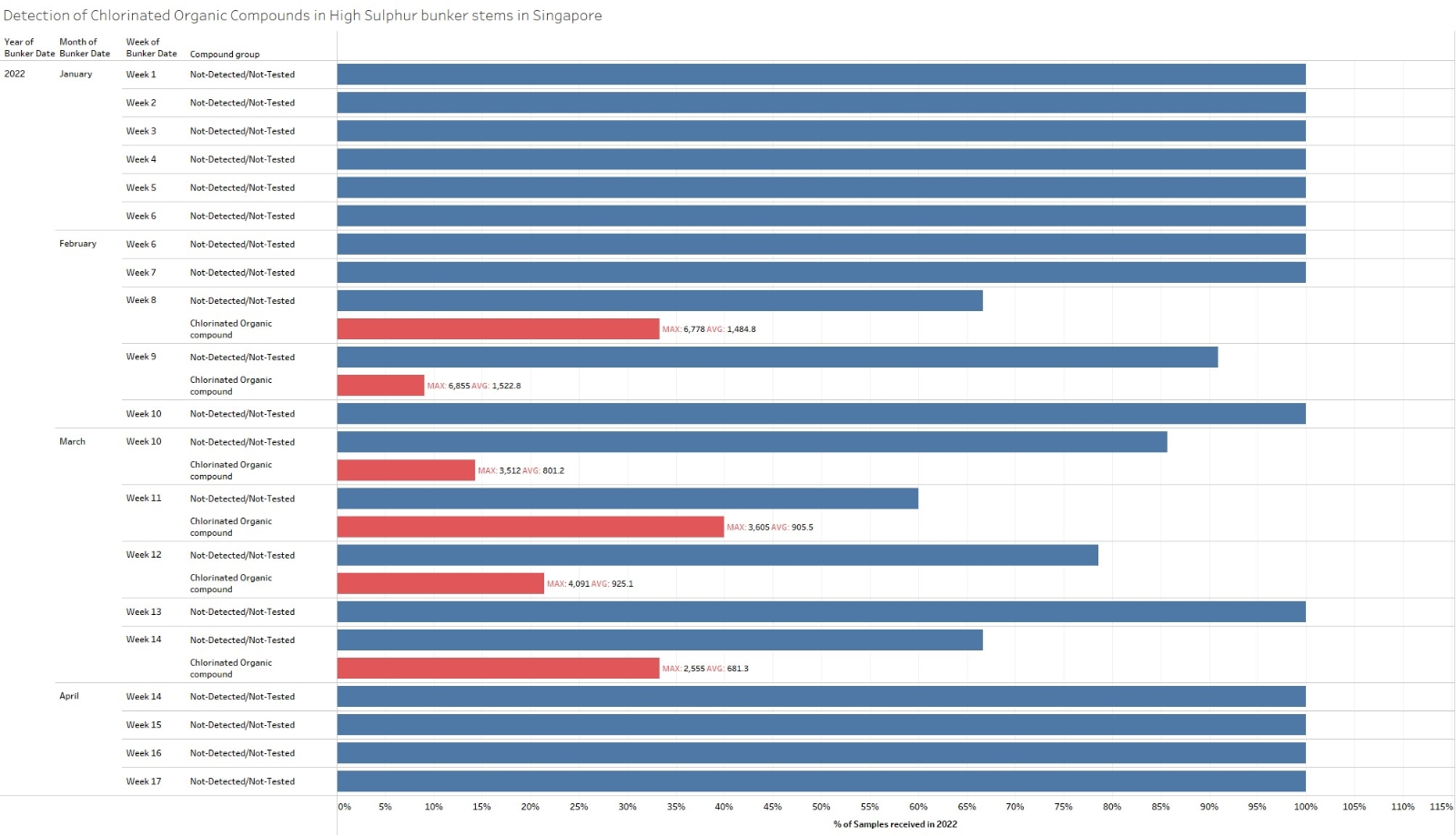 This document however does not reflect on the overall quality of the fuel being supplied in Singapore. If you intend to bunker at this region, CTI-Maritec can assist you with further information of the bunker quality in the region.