MEPC 79 adopted amendments to MARPOL Convention on the following matters:

MEPC 79 progressed on the following:

A summary Table of all adoptions is provided in the appendix.

ITEM 3 - CONSIDERATION AND ADOPTION OF AMENDMENTS TO MANDATORY INSTRUMENTS

MEPC 79 has adopted amendments to MARPOL on the following matters.

MEPC 79 has adopted resolution MEPC.361(79) which adds the new Mediterranean Sea Emission Control Area and its geographic coordinates in Regulation 14 Sulphur oxides (SOx) and particulate matter. The area can be illustrated as follows (blue area): 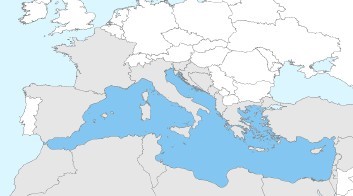 The amendments to designate the Med ECA will enter into force on 1 May 2024 but the new 0.1% limit will take effect for ships operating in Med ECA from 1 May 2025.

Ships may still be fitted with Equivalent appliances (such as Exhaust Gas Cleaning Systems, EGCS or scrubber) as an alternative compliance method, as per Annex VI, regulation 4.

Information to be included in the bunker delivery note (BDN)

MEPC 79 adopted resolution MEPC.362(79) to amend appendix V of MARPOL Annex VI, to include the flashpoint of fuel oil or a statement that the flashpoint has been measured at or above 70ºC as mandatory information in the bunker delivery note (BDN).

MEPC 79 agreed to a revised and updated form for the Ballast Water Record Book BWRB (appendix II of the Annex to the BWM Convention). Relevant amendments to the Convention will be adopted at MEPC 80.

The Ballast Water Record Book is a logbook used and kept onboard, mandatory under the BWMC.

Proposals relating to electronic Ballast Water Record Books and to the development of guidance on completing the BWRB (G6 Guidelines, Example ballast water reporting form) should be developed at MEPC 80.

MEPC 79 agreed that the BWM Convention does not preclude the temporary storage of grey water or treated sewage in ballast tanks and this storage should be permitted.

However the Organization should developed guidance to set out appropriate actions and uniform procedures to ensure compliance with the BWM Convention, and in particular the D-2 standard, when the ballast tanks are returned to ballast water storage (expected at MEPC 80).

Unified interpretations to provisions of the BWM Convention

MEPC 79 agreed to new or modified UI on:

The Secretariat will issue a Circular consolidating all existing unified interpretations, in BWM.2/Circ.66/Rev.4.

The MEPC 79 established a Working Group to consider various issues and decisions were taken on the following matters.

MEPC 79 instructed Sub-Committee PPR (April 2023) to review several proposals related to the need to make progress in addressing the impacts of EGCS discharge water on the marine environment, including a proposal to prohibit the use of scrubbers as an alternative means of compliance under MARPOL Annex VI.

MEPC 79 instructed Sub-Committee PPR (April 2023) to review a possible approach to amend MARPOL Annex VI and incorporate a requirement for ships to only use marine distillate fuel or other cleaner alternative fuels or methods of propulsion that are safe for ships when operating in or near to the Arctic.

The decision to establish licensing schemes for bunker suppliers remains voluntary for Governments. Stakeholders are reminded that circular MEPC.1/Circ.884/Rev.1 “Guidance for best practice for Member State/coastal State” contains a voluntary license scheme in the appendix.

It should be recalled that MEPC 78 had approved Unified interpretations to MARPOL Annex VI/18.3 concerning the use of biofuels (MEPC.1/Circ.795/Rev.6) which recognize that for NOX certification, blends that contain up to 30% biofuel (B30) should be treated the same way as hydrocarbon fuel oils.

Updating reference to ISO standards in the NOX Technical Code

MEPC 79 confirmed that that fuels complying with the ISO 8217:2005, 2010, 2012 or 2017 Standards (specifications of marine fuels), including the FAME products, are the acceptable fuel specifications to be used at the parent engine NOX emissions test.

An amendment to reference to the latest version of the ISO 8217 in paragraph 5.3.2 of the NOX Technical Code will be developed in the future.

Unified Interpretation of regulation MARPOL VI/18.3 on the use of biofuels

MEPC 79 agreed to update the UI in order to clarify the application of regulation 18.3 to synthetic drop-in fuels, belonging to the group of RFNBOs (renewable fuels of non-biological origin).

A revised Circular will be published as MEPC.1/Circ.795/Rev.7 in due time.

The MEPC 79 established a Working Group to consider various issues and decisions were taken on the following matters.

MEPC 79 took note of issues with the IMO Ship Fuel Oil Consumption Database module in GISIS and the ongoing improvements to the reporting process. In particular, following the entry- into-force of the EEXI and CII measures on 1 November 2022, the Secretariat is in the process of incorporating the new reporting parameters in the IMO DCS module while also assessing further changes to the GISIS module to improve user-friendliness and a web-based reporting environment.

It was also noted that the Secretariat was currently not in a position to calculate carbon intensity developments on the basis of demand-based measurements and was in the process of procuring such data.

MEPC 79 noted that there was no sufficient support for further considering the possible introduction of a Phase 4 to strengthen the required EEDI at this stage. Stakeholders are invited to submit further proposals to a future session.

Other observations on exemptions for 2023 survey

The observer from ICS informed the Committee that, ahead of the 2023 survey for EEXI verification, ships were facing critical shortages in the delivery of power limitation devices which were a key compliance method for EEXI, and expressed the view that exemptions would be needed in such cases from flag Administrations.

MEPC 79 has adopted several changes, as listed below.

A revised and consolidated Guidelines will be prepared by the IMO Secretariat in due time, as “2022 Guidelines on the method of calculation of the attained Energy Efficiency Design Index (EEDI) for new ships”, resolution MEPC.364(79).

MEPC 79 noted the general support to insert the Shaft Power Limitation (ShaPoLi) and Engine Power Limitation (EPL) concepts in the EEDI framework. Further work inform is needed to prepare draft amendments to the EEDI calculation guidelines, and to develop draft guidelines on the ShaPoLi to comply with the EEDI requirements and use of a power reserve.

MEPC 79 has adopted one minor change to update the ITTC Recommended procedure regarding the conduct and evaluation of speed power trials.

A revised and consolidated text will be prepared by the IMO Secretariat in due time, as “2022 Guidelines on survey and certification of the Energy Efficiency Design Index (EEDI)”, resolution MEPC.365(79).

The 13th meeting of the Intersessional Working Group on Reduction of GHG Emissions from Ships (ISWG-GHG) took place the week prior to MEPC 79.

All decisive actions are expected to take place at MEPC 80 (June 2023). The IMO GHG Strategy on reduction of GHG emissions from ships Development of the Revised Strategy

MEPC 79 produced a draft revised IMO GHG Initial Strategy, as a compilation of various proposals, which have not been accepted yet. Consequently, more discussions are needed during at the ISWG-GHG 14th and 15th sessions. The revised Strategy should be adopted at MEPC 80.

Key aspects of the revision are still under discussion and include:

MEPC 79 has not adopted any of the proposed measures yet. Further work and discussion are expected during the intersessional period and the ISWG-GHG meetings. Mid-term measures would be finalized and agreed by the Committee between 2023 and 2025/2030, and expected to enter into force by 2030.

So far, there is an increasing support for a combination of a technical element and an economic element within a “basket” of measures, which could promote the energy transition of shipping and provide the world fleet the needed incentive while contributing and ensuring a level playing field and a just and equitable transition. The basket of mid-term GHG reduction measures could comprises:

Finalization and adoption of the guidelines on life cycle GHG intensity of marine fuels (LCA guidelines) is expected at MEPC 80.

Remaining work includes the development of: the Fuel Lifecycle Label (FLL); the methodologies to calculate Well-to-Tank, Tank-to-Wake and entire Well-to-Wake GHG emissions default values for the fuels identified; and the guidance for third-party verification and certification schemes.

Proposals related to onboard CO2 capture

Owing to time constraints, MEPC 79 agreed to further consider proposals related to onboard CO2 capture system and the integration of their impact into EEXI and CII formulas at MEPC 80.

It is proposed to revise the IMO Data Collection System of annual fuel consumption and make changes to the IMO GISIS reporting module, to enhance transparency and to add more reporting parameters.

The proposed changes will be discussed further at MEPC 80 and contain a proposal to include data on transport work (cargo related data such as cargo mass, number of TEUs, lane metres); on the use of innovative technologies (as it impacts EEXI and CII calculations) and on the level of granularity of reported data (to provide more detailed insight into ships' fuel consumption performance and their respective carbon intensity).

Matters regarding the implementation of the CII framework

MEPC 79 had several documents for its consideration, which were deferred to MEPC 80 due to time constraints.

Several delegations reiterated concerns with regard to the non-inclusion of several proposed correction factors and voyage adjustments in the Interim guidelines on correction factors and voyage adjustments for CII calculations (CII Guidelines, G5), which in their view would result in unfair effects on the CII rating for similar ships operating on different routes because of circumstances outside their control.

MEPC 79 also noted the discussion at III 8 on the PSC procedures related to short-term carbon intensity reduction measures, in particular the conclusion that at this stage there was no support within the III to consider as a detainable deficiency the absence of implementation by the ship as planned at the time of the inspection of the three-year implementation plan and/or the plan of corrective actions for a ship rated as D for three consecutive years, or rated as E.

The amendments, prepared by SSE 8, provide a revision of fire protection requirements for incinerators and waste stowage spaces, to remove the discrepancies between the resolution and SOLAS chapter II-2.

Survey and certification under AFS 2001

MEPC 79 endorsed the conclusion of III 8 that under the AFS Convention, there is no such requirement for type-approval as pre-qualification for anti-fouling paint products for issuance of an International Anti-fouling System Certificate, though it should be at the discretion of the Administration to decide if more than what is required under the provisions of the Convention is needed.

ITEM 10 - Identification and protection of special areas, ECAs and PSSAs

MEPC 79 agreed in principle to the designation of the North-Western Mediterranean Sea as a PSSA, subject to the further development and approval of the proposed associative protective measures by the NCSR Sub-Committee.

The proposed PSSA aims to protect cetaceans from the risk of ship collisions, ship-generated pollution and to increase awareness on a critically important area for the fin whale and the sperm whale. It encompasses the already established Pelagos Sanctuary and the Spanish cetacean corridor.