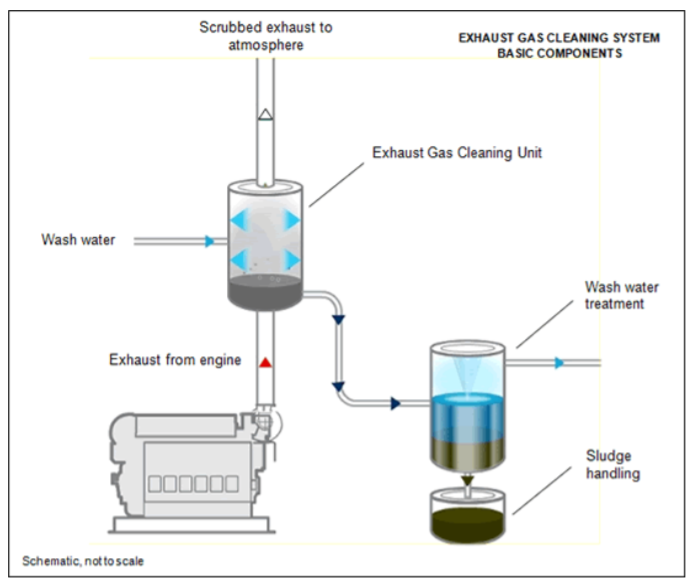 The International Convention for the Prevention of Pollution from Ships (MARPOL), 1973 as modified by the Protocol of 1978, also known as MARPOL 73/78, Annex VI Prevention of Air Pollution from Ships, requires the reduction of SOx emissions either by burning low sulfur fuel oil or cleaning the exhaust gas. Cleaning, or scrubbing, the exhaust gas is generally accepted to be more economical. According to EGCS manufacturer Wärtsilä, the cost saved by using heavy fuel oil instead of low sulfur fuel oil can pay back the cost of installing and operating EGCS in about one year (Hatley, 2010). The EGCSs used today for sulfur control are commonly known as SOx scrubbers. In a wet scrubber, the exhaust gas is mixed with washwater, and the water-soluble components of the exhaust gas are removed by dissolution into the washwater. SOx scrubbers are capable of removing up to 95 percent of SOx from ship exhaust (EGCSA, 2010). By removing sulfur from the exhaust, the scrubber also removes most of the direct sulfate particulate matter (PM). Sulfates are a large portion of the PM from ships operating on high sulfur fuels. By reducing the SOx emissions, the scrubber also controls much of the secondary PM that is formed in the atmosphere from these emissions.