Ships which are destined for recycling are also required to carry an IHM, which will be specific to each ship. An appendix to the convention provides a list of hazardous materials, the installation or use of which is prohibited in shipyards, ship repair yards, and ships of parties to the convention. Ships will be required to carry out an initial survey to verify the inventory of hazardous materials, renewal surveys during the lifespan of the ship, and a final survey prior to the recycling process.

While the HKC still relies on the concept of a ‘Green Passport’, which remains central to most, if not all, operations, the term itself is no longer used. The “Green Passport” is now known as the ‘Inventory of Hazardous Materials’ (IHM), though its purpose remains identical. The IHM still covers the entire lifespan of the ship, from the construction and operation to the preparation for scrapping at the end of the ship’s lifetime.

The EU Ship Recycling Regulation (EU SRR) was adopted in order to reduce the negative impacts upon the environment from ship recycling, by ensuring vessels which are being prepared for dismantling and the methods by which all ship components are disposed of, is conducted in a safe way. This includes hazardous materials which might be identified during the recycling process.

In the EU, strict rules on ship recycling and amending have been put in place in the form of Regulation (EU) No. 1257/2013 (created 20 November 2013). This Regulation as a whole, consists of Regulation (EC) 1013/2006 on Member State complying with shipments of waste, and Directive 2009/16/EC on port State control were published in the Official Journal of the European Union (on 10 December 2013), by the European Parliament and Council respectively. Together these Regulations have been effective since 30 December 2013.

Since 31 Dec 2020 onwards, all ships flying the flag of a member state of the EU are now subject to a survey regime and should carry on-board a ship-specific ‘Inventory Certificate’ issued by the relevant national maritime administration or a Regional Office (RO) authorised by the administration and supplemented by Part I of the IHM.

On a wider scale, the International Maritime Organization (IMO) adopted the Hong Kong International Convention for the Safe and Environmentally Sound Recycling of Ships in 2009. Its purpose is to ensure that ships, when being recycled after reaching the end of their operational lives, do not pose any unnecessary risk to the environment or human health and safety. In addition, the Convention seeks to outline the appropriate management processes regarding hazardous materials on board ships.

The convention addresses all the issues surrounding ship recycling, including in circumstances where ships sold for scrap may contain environmentally hazardous substances such as asbestos, heavy metals, hydrocarbons, ozone depleting materials and others. It also addresses concerns about working conditions in many of the world's ship recycling facilities and how many of these issues can be negated.

Regulations in the new convention covers: the design, construction, operation and preparation of ships to facilitate a safe and environmentally sound recycling process, without compromising operational efficiency and safety of the ships built, the operation of ship recycling facilities in a safe and environmentally sound manner, and the establishment of an appropriate enforcement mechanism for ship recycling incorporating certification and reporting requirements.

As of 31 Dec. 2018, all ships flying the flag of a Member State are subject to a survey regime and must carry a ship-specific ‘Inventory Certificate’ onboard issued by the administration or a RO authorised by it, supplemented by Part I of the IHM, which has been attached below for your reference: 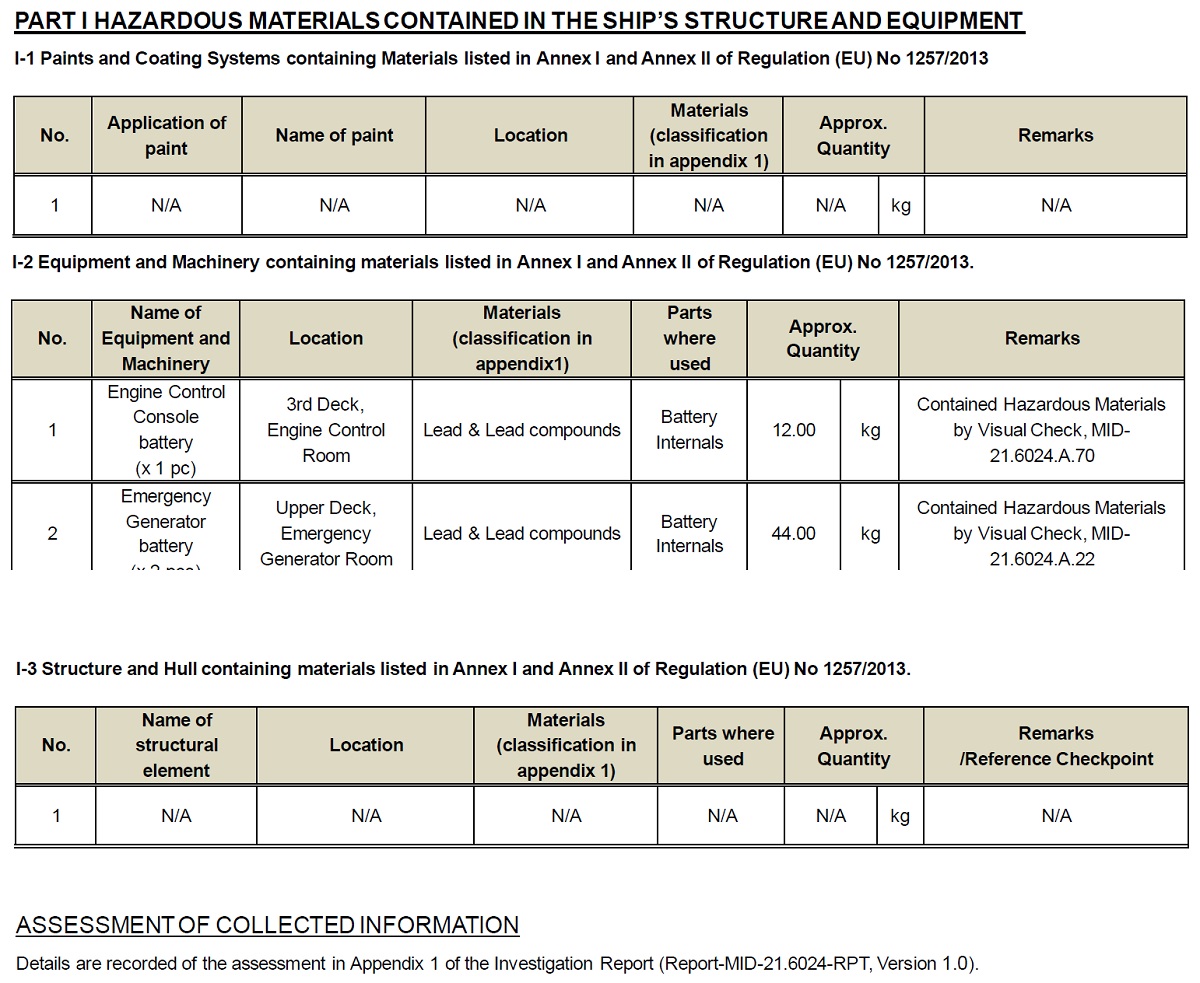 It is also important to note here, that for new ships, Part I (Table A & Table B) of the IHM, should be developed at the design and construction stage.

Our service provides the following outputs: