AN levels significantly higher than those stated above can indicate significant amounts of acidic compounds and, possibly, other contaminants. However, AN below the values stated above do not guarantee that the fuel is free from problems associated with the presence of acidic compounds. A comparison of residual fuel AN detection for samples received by Maritec in Year 2020/21 is given below.. 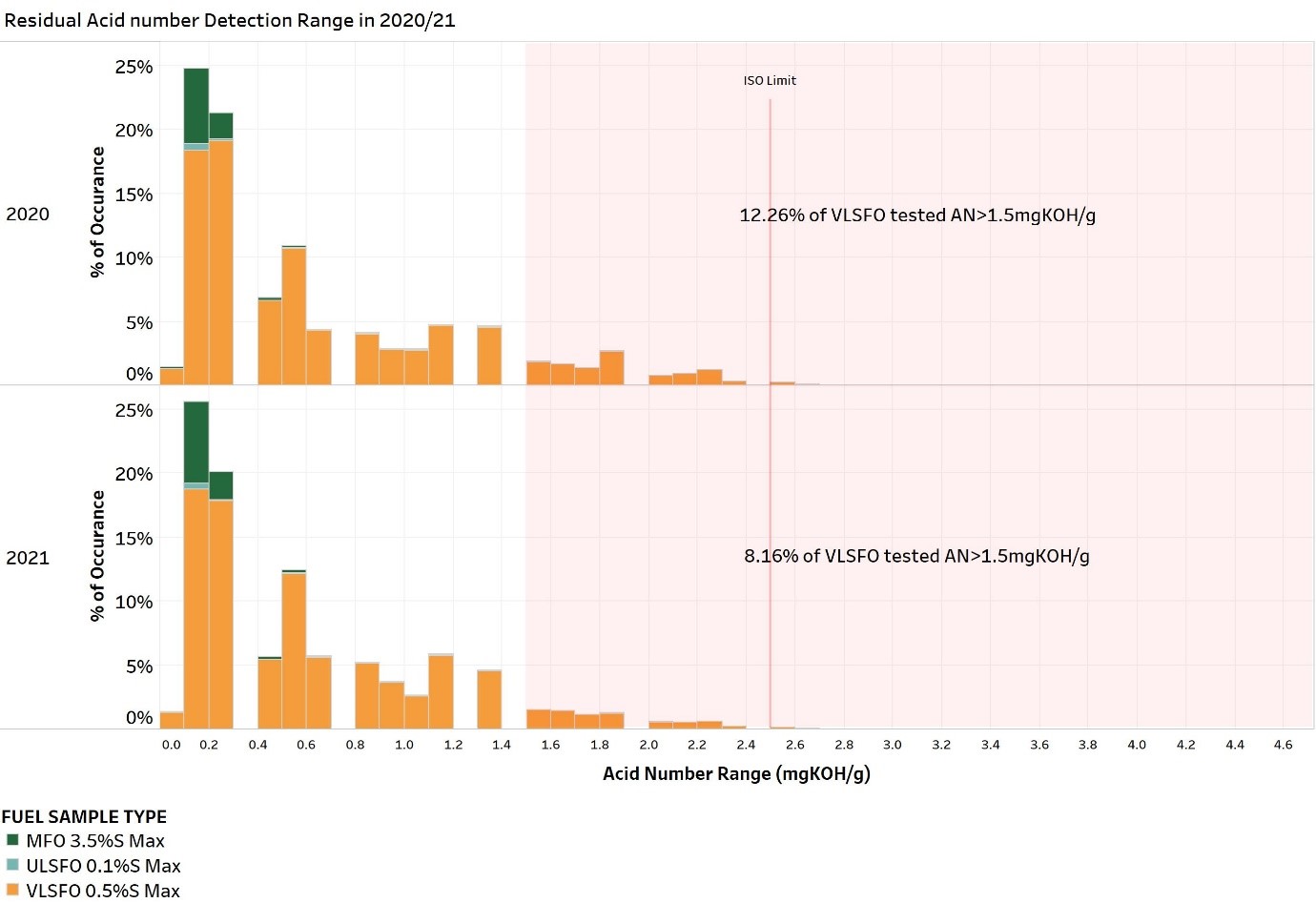 It is noted that partly due to the volume of samples tested and the inherent blend, VLSFO fuels tend to have a wider range of tested acid number.

AN can be a reflection of naturally occurring naphthenic acids in the fuel from the crude source or a reflection of contamination with acidic compounds. High acid number fuel due to naphthenic acids are common in certain parts of the world. Confirmation that a fuel was manufactured from naphthenic crudes can be established by FTIR method on Solid Phase Extraction offered by Maritec.

Fuels contaminated with extraneous acidic compounds however have been linked to many operational problems in the past. ISO 8217 recognises that the presence of acids (even if within the specification limits) can cause operational problems if the acids present in fuels are not naturally occurring naphthenic acids. Further tests by ASTM D7845 GCMS and GCMS on Solid Phase Extraction can help to identify such acidic components.

Past experience has shown some of these components have been linked with severe operational problems, particularly around filters, overloading of purifiers, fuel injection pumps and fuel injectors. Such contaminants even at low levels may contravene the stipulations of Revised MARPOL Annex VI regulation 18.3 and International Marine Fuel Standard ISO 8217, Clause 5.

Examples of such components (or a combination) and their detection compared to the tested AN is shown below.

Based on past detections it was noticed that the probability of detecting such components in the fuel that cause operational issues is potentially increased when the level of AN is 1.5mgKOH/g and higher.

Therefore, Maritec recommends testing the acid number of all marine fuels to have an early warning indicating the presence of above contaminants and the test results can also be a guidance tool for clients to take an informed decision for further forensic analysis to determine presence of deleterious materials & chemical contaminants if any.

More information on the different forensic analysis techniques used to detect such compounds and their associated problems on machinery can be found in the Newsletter published earlier by Maritec.